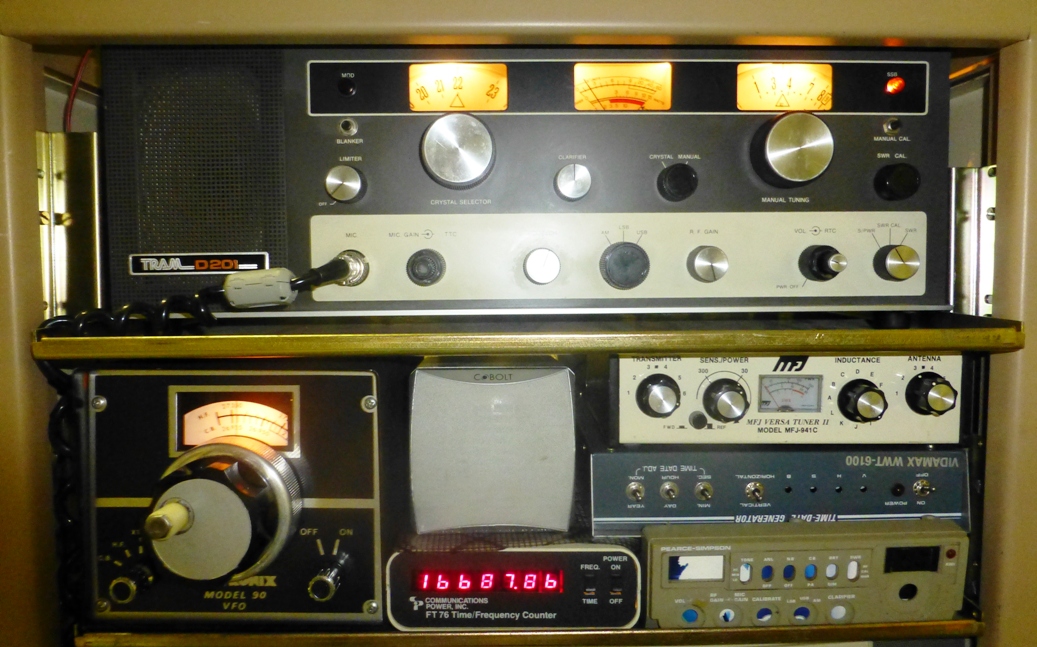 The Tram Diamond is a classic valve powered transceiver that has excellent specifications and reflects this in its rich full audio receive tones and superlative transmitted studio sounding output audio. As much as I would like to talk knowledgeably about the classic Valve powered CB Radio, the Tram Diamond D201, I really could not do the radio justice, until I use it a lot more.

I had always wanted one since they were released in the USA in the early days of CB operation on the government allocated 23 Channels in the 11 Metre Band at the bottom of 27MHz. Best I could do back then, was the first Courier Gladiator 40Ch PLL in Aust.
Many radios followed, but my favorite was always the CPI – Communications Power Inc. CP2000 40CH Base & Console Freq counter. More HERE

When about mid 2007 I was alerted to another radio on Ebay by a friend who knew I wanted a better UHF 477MHz CB, but spotted the TRAM D201 going for about $100 USD!

In the end after bidding on it, and getting it for about $170 USD, I had it delivered to my home in Melbourne Australia for the all up cost of nearly $500 AUD!! – More than I paid for ANY CPI!!

BUT, it was worth it to me, as it was in fantastic condition and come complete with original microphone and complete original service manual with schematics! Although it was 110VAC input it did not concern me because I always have had 110 to 240 VAC transformers around being a mobile Micrographics tech for a US company – Bell & Howell. (Origin of my callsign – The BellHopper )

After firing it up and realising it was only 23 Channels Xtal Locked, I was a bit dismayed as I had thought it was 40 Ch and had an 02A PLL for frequency selection. I had confused it with a later model!

Although the disappointment faded when I realised it could RX tune to 27,500 on the Manual Tuning VFO and could be modded to TX as well. Looks like the RATHOLE and CH#35 are well covered!

After it settled down and got a bit warmer, I found it was receiving LSB on the USB setting but it was listening like my CPI CP2000 but maybe even BETTER! The sound of the audio which can be adjusted for tone on RX as well as TX was warm and clear and the QRN seemed much less than usual.
Maybe just conditions but we will see after I have it tuned up and the RX Mode fixed along with any valves that may need to be replaced to bring it back to its former glory by Brendan from RF Service.

Well Brendan from RF Service did not have the time to repair it so passed it on to Adrian from Sunshine who has moved to Bachus Marsh high on a hill over looking Melbourne.

This was just as well from my point of view because I have known Adrian for 30 years and he is my service tech backstop for what i cant fix on my CPI’s and other CB radios.
Certainly not the cheapest tech, but certainly the BEST!